Asbestos is NOT just a problem of the past.

My life with Mesothelioma 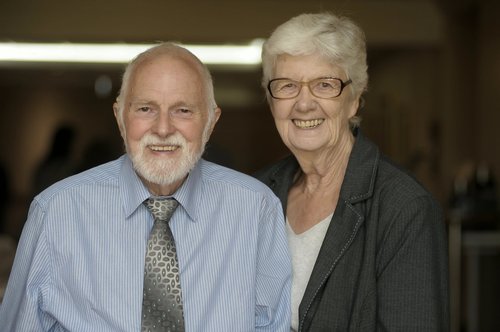 "I’m just an ordinary woman who married at 18 and washed my husband’s clothes as he came home from work at the Chatham Dockyard as a Shipwright. I didn’t know the powder on Ray’s clothes was anything other than dust brought home from work. I shook his clothes and then put them in the washing machine. Forty-eight years later I find I have Mesothelioma and a death sentence of three months. That led to me being given three months to live.I didn’t accept that and after my pleurodesis at the Guy’s Hospital in London, I started chemo, Cisplatin and Alimta which is the standard treatment in the UK. This worked for fifteen months then started growing again.

I was offered the NGR-hTNF trial at Maidstone. This clinical trial acts on the tumours blood vessels which I’m afraid didn’t work for me or I had a placebo. So two sessions of Cisplatin and Alimta, I became allergic but it did work and we had stability again for a while... then growth was found in my next scan.

What would I like next as there are no new trials or Chemo? I’m not used to a doctor having no answers. I emailed Saint Bartholomews Hospital and that Friday I attended an appointment where Peter offered me the last place on the ADAM Trial, but it would mean another Bi-opsy and then I might not even be suitable. He threw me a life line of GemCarbo chemotherapy and I could have that locally. Back to Canterbury and I was on chemo again until September.

The October scan was bad news... the chemo hadn’t worked. A scan every three months was showing the growth of three millimetres every three months. I wasn’t happy. So I got right behind the Saatchi Bill (The Medical Innovations Bill) and worked with Lord Saatchi and the doctors. I was also on the committee when it was launched at the House of Commons. Then a Doctor gave me the advice to go to the Royal Marsden where they were starting a trial that might suit me, so I asked my Oncologist and she referred me.

I’m now on a Phase 1 trial of Immunotherepy. It isn’t just for Mesothelioma but the trial, MK-3475 is a drug being tested which blocks the interaction of a substance called PDL-1 with PD Inhibitor. When I was first diagnosed with Mesothelioma in 2009, I Googled the word as I’d never heard of the disease, only Asbestosis. All the depressing reports and write-ups gave me a shock as there seemed no hope. I turned to Facebook and completed a search which gave me so many Lawyer sites; however I did come across Debbie Brewer’s Facebook which led me to a wonderful community of patients around the world called The Meso Warriors. Debbie and I became friends and together we created more groups. I started the Q&A page so I could ask all the questions I needed and there are groups for other needs such as: Mesothelioma Articles Groups with new trials and news so we can always be ahead and up to-date and also blogs where warriors can tell their day-to-day stories of their fight.

Meso Warriors and Carers groups to help carers understand the diseases as well as get help when needing to cope. Individual Groups that are secret where each member can put their personal thoughts and stories and share with their own friends and family.

We even have a Tears Page for the partners that have lost a loved one so they share their lives afterwards. It’s amazing how that helps in so many ways. Post-mortems and wills and the day to day help to live again. This has all become so successful that the world has joined in and we have members from America, Australia, and many other countries who learn from each other how the world copes with the disease. Also we fight for the ban of Asbestos and how to manage it in the buildings.

The British Lung Foundation previously ran a campaign called ‘Take Five Stay Alive', which I made a video for as well as appearing as the centrefold in their annual report.

Suffering from Mesothelioma, I wish we could take Asbestos out of our lives or the closest to zero that could be humanly achieved. There is no statistical data as to the amount of fibres breathed in over time that can be medically proven to have caused Mesothelioma. I had my exposure from washing my husband’s work clothing, and many people have suffered and are going to suffer from asbestos as a result of unintended exposure. Although the use and importation has been prohibited in Europe since 1999, people continue to be exposed to asbestos in our built environment. For the sake of future generations asbestos must be removed from the world we live and work in. To do that I believe it requires professional companies operating at the highest standards to continue to remove this category 1 carcinogen safely and make our world a safer place. I fought against it by having chemo and now my last chance is MK3475, an immunotherapy treatment which is shrinking my disease very fast. For how long no-one knows at this point. Although my latest Scan has shown no sign of Mesothelioma in my tumours I can’t wait for my next scan just to make sure that really is true as it seems so unbelievable. I fight on for the future and all our Meso Warriors past, present and future.

To follow Mavis’ journey visit the Ray and Mavis Blog

To purchase a copy of the publication Five Years a Mesowarrior

Erase Meso – the only charity dedicated to funding research into mesothelioma

Erase Meso is one of a number of charities that the UK Asbestos Training Association (UKATA) supports. Set up by Paul and Jill Cook in 2019, the charity raised over £84,000 in its first six months.

Erase Meso differs from all other mesothelioma charities in that it raises funds purely for research purposes. Its aim is that one day mesothelioma will no longer be a death sentence, but a curable disease.

Here, we discover what drove Paul and Jill to set up the charity.

Paul Cook, a 43-year old father was a keen kayaker, kitesurfer, golfer, squash player, cyclist and diver at the peak of fitness when a bout of suspected flu hit. Like many, he continued working and delayed visiting a doctor, choosing to soldier on.

Paul’s condition deteriorated and he was admitted to hospital with pneumonia. It was there the medical team discovered that he had a collapsed lung. Further investigations continued after immediate surgery to re-inflate the collapsed lung. Paul had never heard of mesothelioma before his diagnosis in November 2017 – malignant pleural mesothelioma.

Working in recruitment and similar office-based roles all his career, Paul had never worked in an environment that would be perceived as being at high risk for asbestos exposure. He has no idea where or when his exposure to asbestos occurred.

Determined to defy the odds, Paul’s treatment began. He endured six rounds of three types of chemotherapy, a seven-hour surgery to remove the lung lining and 30% of his right lung, radiotherapy, lung drains and intensive rehabilitation. By June 2018, it was good news. The cancer was in remission.

Early on in his mesothelioma journey, Paul vowed that if he survived long enough, he would campaign to make a difference in the world of mesothelioma - to raise awareness, to raise funds for research to erase meso. In 2019, after just months of remission status, Erase Meso was officially launched.

Fundraising began with no small challenge – a group of 15 amateur cyclists, including ‘Meso Warriors’ Paul Cook and Nigel Shaddick, cycled from Land’s End to John O’Groats in just 10 days, raising over £50,000 for the charity along the way.

Nigel (51) is also battling mesothelioma and has taken part in a new drug trial carried out at Edinburgh University. His doctors are amazed at his response and cite his cycling as “very helpful” in his fight against his tumour.

As well as the epic LEJOG bike ride, there have been numerous fundraising events including the Erase Meso Ball. In its first six months registered as a charity, Erase Meso raised more than £84,000 specifically for the funding of further scientific research into the treatments and eventual cure for mesothelioma. There is lots of very promising research taking place in the world of mesothelioma. Research is currently underway to find genetic changes that may cause mesothelioma. Other studies focus on finding specific blood markers that could help detect early-stage mesothelioma. Blood markers are substances found in higher than normal amounts in the blood of someone with cancer.

Researchers are also evaluating new treatments for mesothelioma, including several promising new drugs, gene therapy, new methods of radiation therapy, and immunotherapy. Immunotherapy is designed to boost the body's natural defences to fight the cancer. It uses materials made either by the body or in a laboratory to improve or restore immune system function.

The research, however, cannot continue without funding. Charities such as Erase Meso give hope to Meso Warriors, their friends and family every day.

If you are able to donate, fundraise, or help in any way, please visit the charity’s website at erasemeso.org.